5: SeaWiFS - the little sensor that could 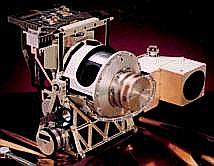 To start off with, it was the first NASA mission that was carried out as a data buy rather than the more traditional approach of designing, building, launching and operating a satellite all within the NASA system. In this case, the first of its kind by the way, NASA in collaboration with the scientific community defined very specifically what kind of data were needed, what the requirements were that had to be met, how 'good' the data had to be and how many years the data set should be collected. These requirements were advertised and from the private companies that responded to NASA's announcement, one was selected. While NASA was greatly involved in most aspects of the design and building of the satellite (called SeaStar) and the instrument (SeaWiFS), it did not have the kind of involvement that is common in the more typical NASA mission. There are both advantages and disadvantages to this but since the SeaWiFS mission has been so successful in so many ways, I'd have to say that in this case, it was a great way to go. Another pretty unique feature of the SeaWiFS mission is the way the SeaStar satellite was put in space. When you think of a satellite, I'm sure the most common way you think of a satellite being launched is on top of a rocket. Now most rockets that you have seen launched sit on a launch pad, somebody counts backwards from ten and when they reach zero, a button is pushed, flames erupt from the base of the rocket and after a few agonizingly long moments, the rocket slowly begins to leave the pad and head off into the clouds.

When you think of it, so much of the energy that is used to launch a rocket goes into overcoming the inertia of all that mass sitting on the ground and getting it moving in an upwards direction, then turning it on its side and head it off into orbit around the earth. What was done witth SeaWiFS was really very ingenious.

The satellite was placed at the end of a relatively small rocket which was attached to the bottom of an airplane which then took off, climbed to about 40,000 feet, pointed its' nose in the correct direction and then dropped the rocket and got the heck out of there really fast. Three seconds later the rocket motor ignited sending the spacecraft and satellite into orbit.

Once placed in its initial, parking orbit of 278 kilometers, the satellite was slowly brought to life with one system after another being tested very carefully. During the next thirty days, the satellite's orbit was slowly raised through a series of very short rocket firings until it finally reached its operational altitude of 705 kilometers above the earth. On September 4, 1997, the SeaWiFS instrument was turned on for the first time as it passed over NASA/Goddard and within minutes, the very first SeaWiFS image was collected, processed and on the World Wide Web for all the world to see.

Below are several animations that will help illustrate some of the more specific aspects of the SeaWiFS sensor and its operations:

Click on the picture to see a short animation of the SeaStar Spacecraft.

Click on the picture to see an animation of SeaWiFS daily coverage.

Click on the picture to the SeaWiFS lunar calibration procedure.

It doesn't do anybody any good to have a satellite in orbit 705 kilometers above the Earth collecting data if there isn't a way of getting that data back to Earth in a timely manner. This is yet another aspect of the SeaWiFS Project that is also rather unique. The satellite orbits the Earth every 99 minutes, 14 times per day. Since half of the Earth is dark at any given moment, and since SeaWiFS is only able to collect useful information where the sun is shining, we only collect data on the sunlit portion of the orbit. As the satellite comes over the North Pole, the SeaWiFS instrument is turned on and begins to beam down data via a radio transmitter to any receiving station that is withing range. At the same time, a subsampled version of these observations are recorded onboard the spacecraft. After about 7 orbits, the satellite passes over the East Coast of the United States at approximately noon, where it transmits half a world of recorded data to the ground station here at NASA/Goddard and as a backup to the station at NASA/Wallops and GeoEye just in case our ground station is unable to receive the transmission. The spacecraft continues to circle the Earth repeating the process until 12 hours later at midnight when it passes over the East Coast again, and transmits the data covering the rest of the world.

As soon as the data are collected, the images are processed to produce the large number of parameters that we wish to monitor and that data is made available both in digital as well as in image form to people around the world.