While the SeaWiFS images are remarkable in their beauty and have opened our eyes to aspects of this changing planet that we have never seen before, they are far more than just pretty pictures. A number of very significant scientific studies have been conducted over the past few years in which SeaWiFS data have played a major part. Below are a list of some of the more significant stories that have featured SeaWiFS data. 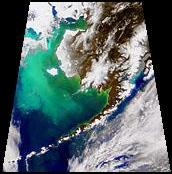 Since launch, SeaWiFS images of the Bering Sea have revealed previously unrecorded blooms of a unique species of phytoplankton called coccolithophores, that have transformed the color of the Bering Sea from its natural deep blue to a shimmering aquamarine in a matter of weeks. As yet, the cause behind these remarkable blooms have not been explained and their long-term effects are unkonwn, but their presence coincides with lower salmon counts along the coasts, a redistribution of microscopic animals in the surrounding ocean, and the massive deaths of shearwaters-hook billed, surface-feeding seabirds elated to the albatross. Together, these events may spell major trouble for the Bering Sea ecosystem and the fisheries that ply these waters.

The Color of El Niño

Many people have heard about El Niño and its counterpart La Niña. For the first time, scientists were able to actually watch the Pacific Ocean's biological response to the transition between these two major ocean/atmosphere events thanks to SeaWiFS. During the transition which took place in May 1998, the equatorial Pacific went from its nutrient-depleted, phytoplankton-poor El Niño condition to a nutrient and phytoplankton-rich La Niña condition almost overnight. The spatial extent of the phytoplankton bloom that followed the recovery from El Niño was the largest ever observed for the equatorial Pacific.

Spring Bloom in the North Atlantic

Every March, one of the ocean's grandest biological events begins just north of the Sargasso Sea and Bermuda. As days in the northern Hemisphere begin to lengthen, phytoplankton, nourished by the abundant nutrients in the surface waters that the winter storms have supplied, explode in numbers producing a massive greening of the North Atlantic Ocean which is often referred to as the Spring Bloom. SeaWiFS data allow us to follw to birth and death of this bloom across the vast expanse of ocean in ways that ships have never been able to do in the past.

Where vast quantities of organic matter and nutrients wash off the land and into the ocean, regions known as dead zones have been forming. These areas are slowly spreading out across the seafloor starting at the mouths of many of the world's major rivers such as the Mississippi and the Yangtze where through the bacterial decomposition of this increased organic load, the bottom waters are being stripped of all their life-supporting oxygen.

Data from SeaWiFS are revealing higher levels of phytoplankton productivity in the Southern Ocean than researchers had originally estimated. Changes in global climate could change the species compositions of these phytoplankton communities in ways that might reduce their capacity to remove the greenhouse gas, carbon dioxide, from the atmosphere.

Convergence Zones: Where the Action is

Sometimes, when ocean current systems interact, surface water masses move toward each other and sink along the meeting line -- concentrating phytoplankton and the nutrients that they need for growth. These zones of enhanced productivity are often visible in satellite ocean color data.

SeaWiFS Captures a Sandstorm
the Size of Spain

Dust from the Sahara Desert has been implicated in such seemingly unrelated processes as North Atlantic hurricane formation, disease outbreaks among Caribbean coral reef communities, and fertilization of Amazon rain forests. From the high vantage point of Earth orbit we are gaining new appreciation of the vast scales of some of North Africa's arenaceous offerings.

In April, 1998 a wind storm in western China sent large quantities of dust travelling across the Pacific Ocean to the western shores of the United States. The event -- tracked by SeaWiFS and other orbiting sensors as well as many ground-based instruments -- induced an international collaboration of scientists that was (and continues to be) hosted on the World Wide Web.

When the wind blows past a mountainous island or when two opposing ocean currents meet each other circular motions arise and can often be seen from space revealed in the cloud field or in phytoplankton patterns in the water.

Volcanism From a Safe Distance

A powerful volcano can inflict great havoc on its surroundings. Very powerful eruptions can even modify the earth's climate. The telltale sign for SeaWiFS, however, involves no sound, heat, or earthquake, but only a narrow plume leaving a mountain summit or a discolored cloud over the ocean near some volcanic island chain.