Monitoring the Earth from Space with SeaWiFS 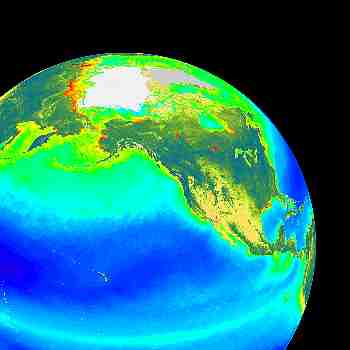 1: Why should we care about the oceans?

2: Why study the oceans from space?

3: What color is the Ocean;

and why do you need a satellite to tell you?

4: Phytoplankton - All things great and small

7: Putting it all together

Imagine that you are standing on a beach looking out over the vast expanse of seemingly featureless ocean that lies before you. If you turn around and look at the land on which you are standing, it seems filled with life. Birds hover overhead, trees dot the landscape as far as you can see and perhaps you might be lucky enough to see a few other animals scurry past. Indeed, the surface of this planet we call Earth seems filled with life. However, looks can be deceptive.

If you think of where the creatures you can see live, you'll realize that they inhabit a very thin veneer of the surface. Various worms, bugs and other creatures that are better left alone may dig a few feet below the surface into the rich topsoil. Birds while gliding happily through the sky, must find a place to perch, to build a nest and to find food. Even the most adventurous bird can only perch as high as the tallest tree. So life on land really only exists in a band perhaps several hundred feet thick.... regardless of the actual elevation of the land surface itself.

The oceans are different.....very different. Back in 1960 when people descended to the deepest part of the ocean for the very first (and last) time, they turned on the outside lights and there, in front of the viewport at a depth of over seven miles (35,802 ft (10,912 m)), was a strange looking little fish looking back at them and probably wondering who these visitors were. This "flatfish at the very nadir of the earth" was living at a place where the water pressure was more than 8 tons per square inch, or the equivalent of one person trying to support 50 jumbo jets. Just to give you a sense of scale, at that depth you could cut Mount Everest off at sea level and put in on the ocean floor at the bottom of the Marianas Trench, where that little fish was swimming, and there would still be over a mile of water over the top of it.

So when you consider the fact that life in the oceans can be found from the surface all the way down to the very bottom of the deepest submarine trench, it is not surprising to realize that the oceans represent over 99% of the living space on Earth....we are indeed living on what is truly an Ocean Planet.

While we make think that the only mysteries left to discover await us on distant planets, there are still plenty of wondrous creatures to study and incredible places waiting to be explored right here in our own backyard....especially in the ocean. Did you know that the blue whale, Balaenoptera musculus, is the largest known animal ever to have lived on sea or land and can reach more than 110 feet and weigh nearly 200 tons - more than the weight of 50 adult elephants? And to show that there is still plenty left to see, one recent study of a deep-sea community revealed 898 species from more than 100 families and a dozen phyla in an area about half the size of a tennis court. More than half of these were new to science. And finally, consider the fact that there exists a creature in the oceans that we know to be the world's largest invertebrate, that can grow to at least 60 feet in length, has eyes as large as vollyballs but which has never been seen alive in its' natural habitat. Although the Giant Squid may be the stuff of legend, it is very real indeed and is just one of the as yet unsolved mysteries of the ocean.

The aspect of the life in the ocean that I would like to focus on in this discussion, however, is at the other end of the size spectrum from the giant squid. In fact, they are actually microscopic and are called Phytoplankton - those tiny little plants that drift with the currents throughout the ocean but play an absolutely critical role for all life on this planet. You may ask "why should i care about a bunch of tiny little floating plants in the ocean that i can't even see, and what could they possibly do for me?". Well, it is safe to say that without phytoplankton, life on earth as we know it would never have happened and without them, it would cease to existi. Just to give you a few facts to whet your appetite: