For the previous reprocessings of MODIS Terra ocean color, R2010.0, the instrument radiometric calibration was based on a preliminary "Collection 6" calibration by the MODIS Calibration Support Team (MCST), with significant additional modification by the OBPG to adjust the temporal trends in the response versus scan angles (RVS) and polarization sensitivity changes. These temporal adjustments, which could not be fully characterized by the on-board (lunar, solar) calibration (Franz et al. 2008, were derived by cross-calibration with SeaWiFS (Meister and Franz 2011). Unfortunately, the SeaWiFS mission ended in late 2010, due to a terminal spacecraft anomaly. The purpose of MODIS-Terra Reprocessing 2013.0 is to implement a new instrument calibration that is maintainable beyond the end of the SeaWiFS mission.

The basis of this reprocessing is the MODIS Calibration Support Teams (MCST) look-up table (LUT) V6.1.14.13. This is the same LUT that is being applied for the operational Collection 6 processing of MODIS Terra Land and Atmosphere products. The final MCST C6 calibration includes time-varying corrections for changes in response versus scan angle (RVS) for several bands, which were derived using observations of desert sites. These desert-based corrections largely replicate what the OBPG had previously derived from cross-calibration to SeaWiFS, and previously applied in the R2010.0 Terra reprocessings. The results using this LUT alone, however, still showed significant artifacts (residual cross-scan variations and detector/mirror-side striping in derived products). To mitigate these effects, the OBPG developed a cross-calibration approach using global MODIS-Aqua Level-3 water-leaving radiance retrievals as the vicarious calibration source. This Terra-to-Aqua calibration is used to derive temporal adjustments to RVS (relative to the MCST calibration) and polarization sensitivity that improve consistency with MODIS Aqua and SeaWiFS long term trends in water-leaving reflectance, and reduce residual striping and cross-scan artifacts.

Aqua launched 2 years after Terra, so a correction with Aqua is not possible in the early Terra mission. Fortunately, MODIS Terra calibration was relatively stable at the beginning of the mission, so a cross-calibration correction is not needed for most bands. It was found that the blue bands do benefit from a correction in the early part of the mission, so SeaWiFS data was used to derive crosscalibration coefficients for bands 8-10 (412nm to 488nm) up to 2010 (the end of the SeaWiFS mission); starting from 2011, MODIS Aqua derived crosscalibration coefficients are used for the blue bands. Note that band 3 (469nm) is not corrected with SeaWiFS data, because SeaWiFS does not have a band with a similar wavelength; for a future reprocessing, the usage of adjacent SeaWiFS bands to derive a correction for MODIS Terra band 3 will be evaluated. In this reprocessing, MODIS Terra bands 1, 3, and 4 (645nm, 469nm, and 555nm, resp.) have been crosscalibrated to the respective MODIS Aqua bands for the first time.

Processing algorithms are identical with the previous reprocessing (R2010.0). 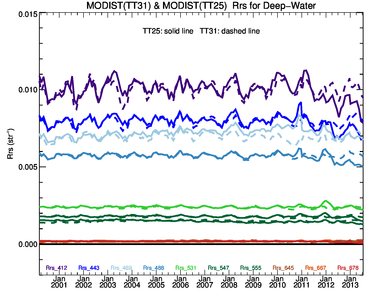 The plots below show the change in chlorophyll in oligotrophic, mesotrophic, and eutrophic waters. 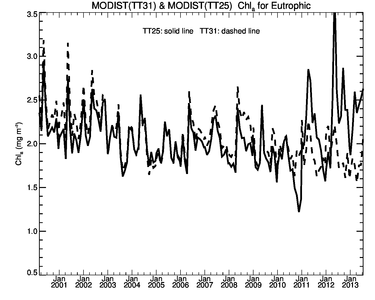