For the previous reprocessing (R2009.1), the calibration of the MODIS Aqua bands 8 and 9 (412nm and 443nm) was modified by the OBPG to adjust the temporal trends in the response versus scan angles (RVS). These temporal adjustments, which could not be fully characterized by the on-board (lunar, solar) calibration, were derived from SeaWiFS data up to the end of 2009 (Meister et al. 2011). The extrapolation of these RVS trends for bands 8 and 9 performed relatively well for the first half of 2010, but not beyond. Additionally, the standard MODIS calibration sources (solar diffuser and lunar measurements) suggested slight modifications for all bands in the later part of the mission. In June 2011, it was decided to reprocess the MODIS Aqua ocean color products for the latter part of the mission, starting from 1 January 2009. This partial reprocessing modifies the calibration starting from 2009 only; the calibration before January 1st 2009 is unchanged. Processing algorithms are identical to the SeaWiFS, MODIS Terra, and OCTS R2010.0 reprocessings, so this reprocessing is designated MODIS Aqua Ocean Color Reprocessing 2010.0.

The basis of this reprocessing is the MCST look-up table (LUT) V6.1.7.3_OC5c. This LUT was created by merging the LUT that was used for R2009.1 (V6.1.7.0_OCa) with a special LUT from MCST for the OBPG (V6.1.7.3_OC5). The V6.1.7.3 LUT is the latest available from MCST, based on their analysis leading into MODIS Aqua Collection 6 reprocessing for Land and Atmospheres. In the merged LUT, there is an abrupt transition on 1 January 2009. In bands 412 and 443, this is compensated for by a similar transition in the OBPG-derived correction for temporal change in the response versus scan angle (RVS).

The algorithm to derive the temporal changes in RVS for bands 8 and 9 is identical to the one from R2009.1, see Kwiatkowska et al. (2008) for a thorough description of the algorithm as it is applied to MODIS Terra. The application to MODIS Aqua is described in a manuscript (Meister et al.) that is currently (as of June 2011) under revision). The underlying approach is to use SeaWiFS L3 water-leaving radiances, bring them to the TOA for the MODIS Aqua viewing and illumination geometry, and calculate corrections to the MODIS Aqua calibration (MODIS Aqua requires only an adjustment to the radiometric gains, whereas MODIS Terra also needs adjustments to the polarization sensitivity). The main difference to the previous processsing R2009.1 is that additional SeaWiFS data was available to derive the corrections (from January 2010 to December 2010; SeaWiFS ceased operation in December 2010). Also, SeaWiFS R2010.0 data was used instead of SeaWiFS R2009.1 data.

The changes of the corrections relative to the previous reprocessing are largest in band 8 (up to 3%), and relatively small in band 9 (about 1%). The fixed RVS corrections in bands 10-14 are identical to the corrections in R2009.1. More information on the corrections is provided in a presentation from the 2011 MODIS Science team meeting (slides 29-38): http://modis.gsfc.nasa.gov/sci_team/meetings/201105/presentations/ocean/meister.pdf

Processing algorithms are identical with the previous reprocessing (R2009.1), with the exception of a small modification to the temporal interpolation of ozone which was introduced in the R2010.0 reprocessings of SeaWiFS, MODIS Terra, and OCTS. 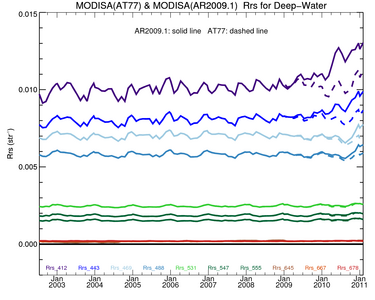 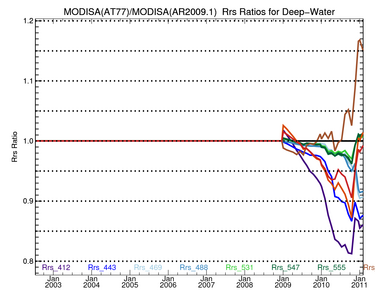 The plots below show the change in chlorophyll in oligotrophic, mesotrophic, and eutrophic waters. The largest difference in chlorophyll between R2009.1 and R2010.0 (dashed line in the plot below) is in the chlorophyll for the eutrophic regions. A drop of about 50% at the end of the mission has been removed: 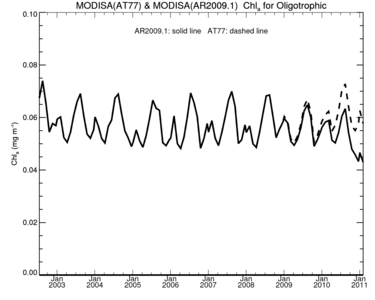 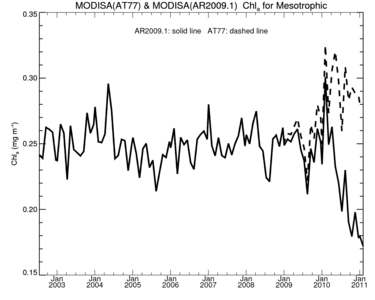 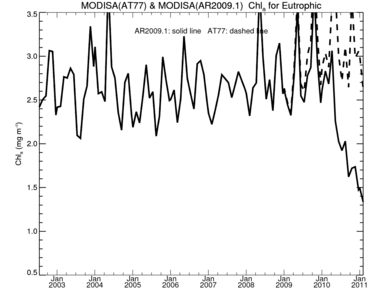