I know that it has been quite some time since we provided any updates on the status of our little ocean color Cubesat named SeaHawk that was launched along with 63 other spacecraft on a SpaceX Falcon-9 rocket on 3 December 2018.  The past few months have been quite busy, carrying out a carefully orchestrated series of activities designed to commission the various components of the spacecraft and instrument.  Well after much work, some blood, sweat and i must admit, a fair share of tears, we are very happy to be able to share the news that last week, three major events took place that building upon the lessons that we learned since launch, culminated in the successful acquisition and downlink of the first HawkEye image of the earth.

On Wednesday 20th March, the lower solar panel that covered the Hawkeye instrument was successfully deployed exposing the optics of the instrument for the first time since it was sealed in its little travel pod back in Glasgow, Scotland in late September.  Then on Thursday morning, a schedule was uploaded to the spacecraft that commanded HawkEye to take its first earth image as it flew southward over the coast of California.  We had a number of possible targets to choose from that day that met our other criteria and after much discussion, we made the final selection based on the pattern of cloud cover that we had been monitoring over the previous days and on the forecast for that day.  The image below is a screen snap from our planning tool showing the target that was selected and uploaded on Thursday morning.  In many ways it was only fitting that this should have been its first image since two key locations in the life of our mission were located here - Vandenberg Air Force Base from where SeaHawk was launched and also, the home of Alan Holmes and Cloudland Instruments, the people responsible for the design and construction of the HawkEye instrument. 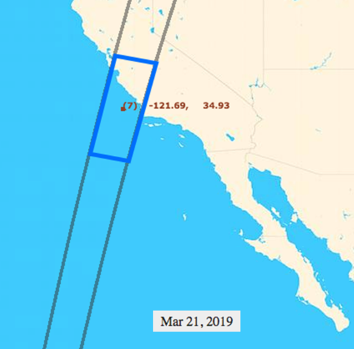 We received confirmation later that day from Clyde Space that an image had indeed been taken and was stored on board ready for downlink.  The next day, Friday morning at 11:35am as SeaHawk flew over the NASA Near Earth Network receiving station at Wallops Island, Virginia, the spacecraft's X-band transmitter was turned on as it reached an elevation of 20 degrees above the horizon and broadcasting at a rate of 50msps coming off the tiny antenna (see image below), transmitted its data to one of the Wallops 11 meter antennas. And just as had been planned, tested and rehearsed, the data were successfully captured by antenna and transferred within seconds from Wallops to NASA/Goddard where our processing system detected the files, reassembled the packets into a full recreation of the complete downlink file and scheduled it for subsequent processing.  While everyone involved in the project spanning 8 time zones held their collective breaths, within minutes, we had an image to look at.  Our collective sighs of relief turned into shouts of joy as we saw just how beautiful this first image was.  Here is a map of California with the first full Hawkeye image superimposed. 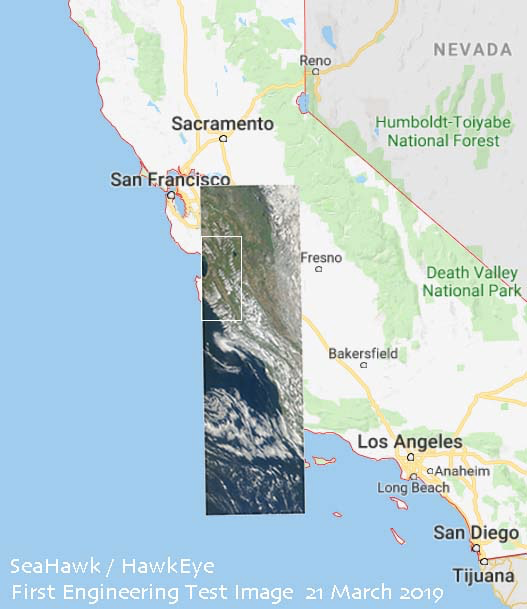 Here is a three band true color full resolution section of this first HawkEye image as outlined by the white box above with the eastern half of Monterey Bay on the left hand edge of the image. 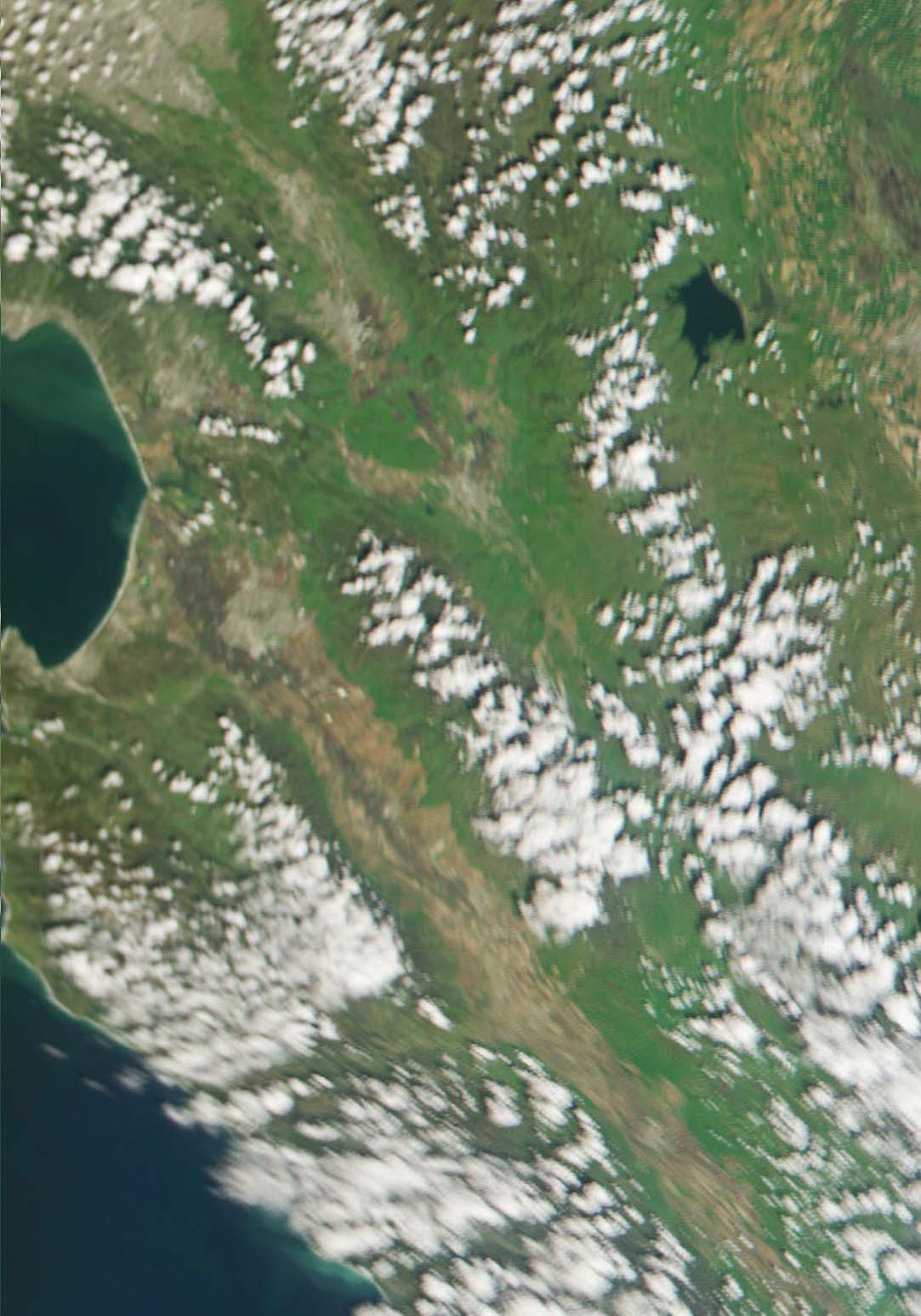 In an attempt to demonstrate the nearly order of magnitude improvement in spatial resolution that we believed that HawkEye would provide, we can now actually see this for ourselves.   In order to focus solely on a comparison of the spatial resolution between HawkEye and our current suite of Ocean Color sensors, i scaled the chlorophyll-a retrievals that were calculated for Monterey Bay taken by HawkEye/Seahawk on 21 March 2019 and those taken by MODIS/Aqua one day earlier on 20 March 2019 so that the color patterns were similar.  You can see the actual chlorophyll-a concentration ranges below each image.   Although I would have preferred to have had a comparison between MODIS and HawkEye at near nadir resolution on the same day, this one day difference seems to work just fine and the patterns of chlorophyll-a in the Bay remained quite similar.  On the day of the MODIS overpass, Monterey Bay was just a little bit off center of the swath so the pixel resolution is very close to the 1km native resolution.  Both data sets were then mapped to the same geographic region so as to preserve the native resolution of each sensor.  The result is presented below: 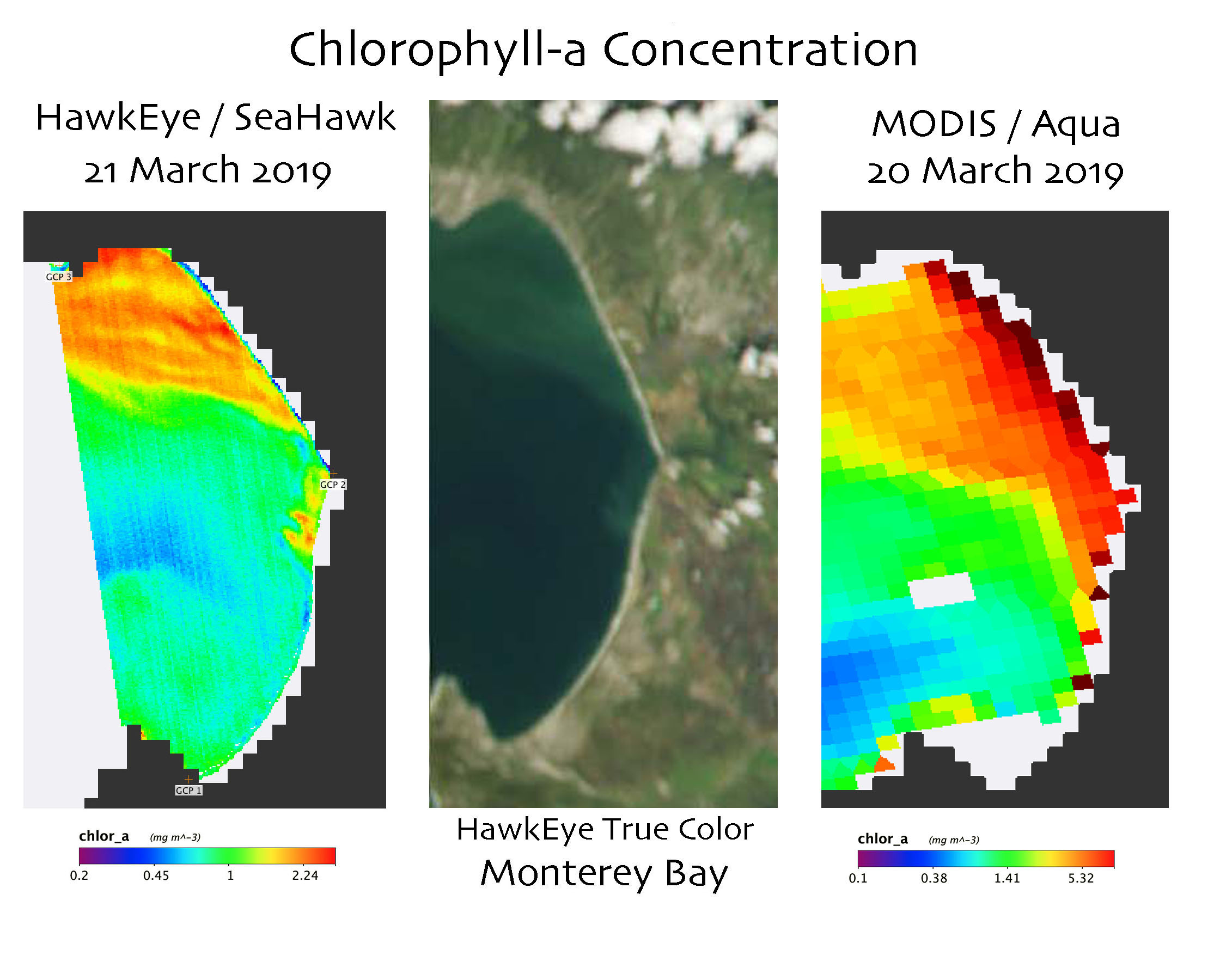 The difference in what we have been used to seeing in MODIS and with our current suite of ocean color sensors, and how our knowledge of the smaller scale, sub-pixel variability in the ocean that has been hidden from us for so long, is now revealed in this first image from HawkEye.

While we realize that we still have much work ahead of us before we can move into what we hope will become "routine operations", we are going to take some time to celebrate this tremendous accomplishment and to begin to learn what we can from this first image our our amazing home planet seen through a brand new set of eyes.

For a more information about SeaHawk and HawkEye and more details about our first image, please take a look at our mission's website at:

and more information about the first light image:

And on behalf of the entire team from UNCW, the Moore Foundation, AAC Clyde Space, Cloudland Instruments and NASA ( https://uncw.edu/socon/team.html ),