Green Algae and the Olympics 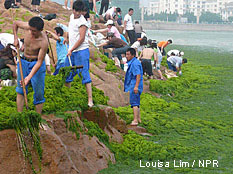 Giant bands of bright green algae threaten to disrupt the upcoming Olympic sailing events at the venue in Qingdao. The Chinese government has mobilized thousands of volunteers to scoop the algae from the water in hopes of controlling the boat-stopping invasion by July 10th.

Comparison of two MODIS images -- one collected on 28 June 2008 and one on 6 July 2008 -- seems to show that natural forces are aiding the cleanup. The earlier image clearly shows the vast extent of this massive algae bloom; in the later image the dense green patches around the sailing venue appear to have dispersed somewhat although similar patches are still visible to the south and about a hundred kilometers to the northeast.