The SNPP mission has restored data collection following a spacecraft anomaly that occurred on 26 July 2022. The VIIRS calibration team is evaluating the data to determine any impacts the two-week outage may have had on data quality. This evaluation may take several weeks to complete. Until such time as this analysis is complete and any calibration adjustments can be made, users are cautioned against using these data for scientific analyses.

Note that since the text and image below were created we have switched to using quadsphere level-6 bins for searches. Each level-6 bin covers the same area as 4 level-7 bins.

The specification of geographical areas of interest in the ocean color browser is done in terms of equal area bins defined using the quad-sphere binning scheme at level 7. These bins are roughly 72 kilometers across.

The example image below has been marked with the quad-sphere, level-7 bin boundaries to give you a better idea of their size. 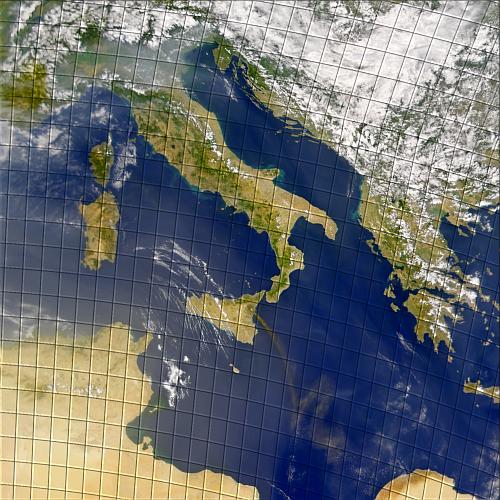 Some programs that search for satellite data granules implement their geographical searches in terms of corner coordinates or coordinate extrema (i.e. maximum and minimum latitude and longitude). Such searches will often yield more "false positive" results than this interface. The reason for this is explained by the image below. (Clicking on the image will download a larger version.) 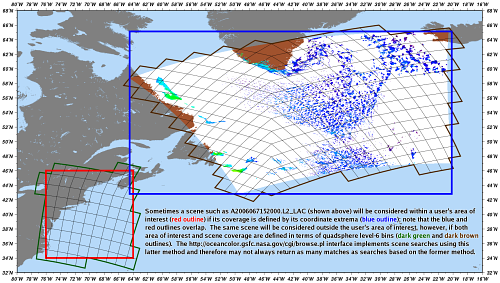 Sometimes a scene such as A2006067152000.L2_LAC (shown above) will be considered within a user's area of interest (red outline) if its coverage is defined by its coordinate extrema (blue outline); note that the blue and red outlines overlap. The same scene will be considered outside the user's area of interest, however, if both area of interest and scene coverage are defined in terms of quadsphere level-6 bins (dark green and dark brown outlines). The https://oceancolor.gsfc.nasa.gov/cgi/browse.pl interface implements scene searches using this latter method and therefore may not always return as many matches as searches based on the former method.

A more formal definition of the quad-sphere binning scheme follows.